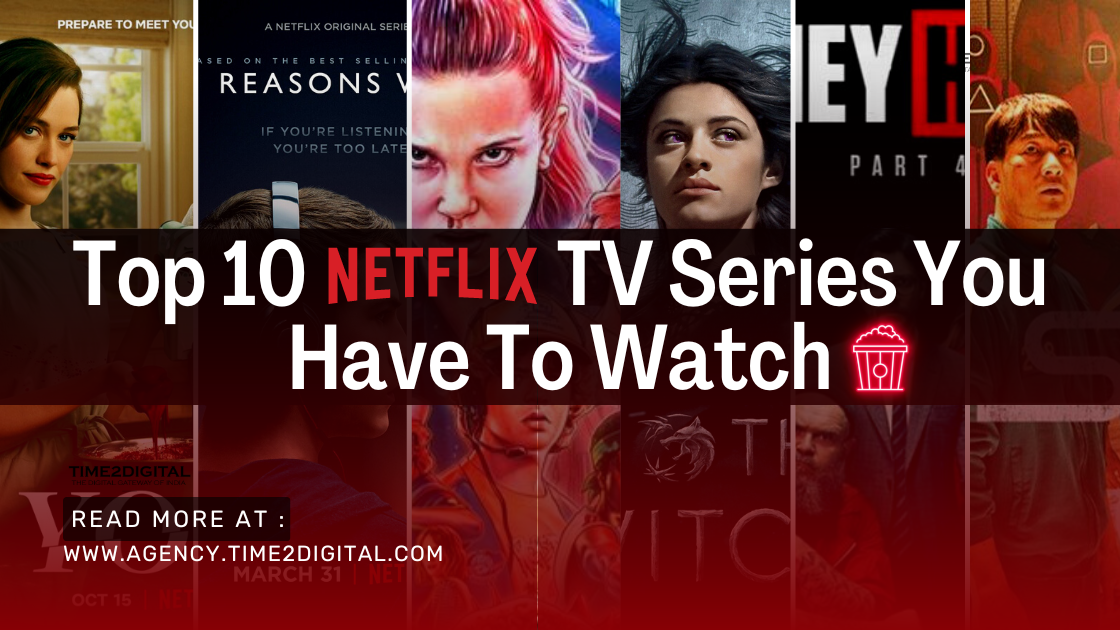 Best Top 10 Most Watched Netflix Shows of All Time

In October 2022, Netflix will have been available for 15 years. Even though there are still millions of people in the United States who don’t have access to the internet, everyone seems to know what “Netflix & Chill” is, who their favourite Stranger Things characters are, and that they’re all watching Squid Game.

Since its global premiere on September 17, the TV show that was predicted to become the Most watched Netflix shows ever has allegedly reached 142 million homes, shattering records and earning money while becoming a tremendous viral phenomenon. Though this isn’t shocking information, considering the ferocity of the competition, it is remarkable that the Squid Game has been generating so much buzz after only a month.

For a long time, Netflix hid its audience data, especially for its own productions. While developments in this area continue, rest assured that Netflix will abide by any figure they publicly declare, regardless of how those numbers are calculated. When comparing Squid Game to other Netflix originals, we can only use the data that Netflix publicly shares at the time the data is shared.

What we’re doing today is looking at everything that goes into these numbers, and Netflix even reveals which season of each series reached the milestone. Earlier this year, Netflix said that it was updating its metrics for gauging the popularity of its content.

Unlike the company’s traditional core statistic, which considers any watch time of at least two minutes to be a “household view,” the new data will include total hours seen. Moreover, the streamer has promised weekly disclosure of audience statistics.

In light of the new data, we present The List Of The Top 10 Most Watched Netflix Shows That Are Absolutely Favourites & Make a mental Top 10 of your favourite programmes before you start scrolling to see how many you got right.

In Season 2, Goldberg moved to the West Coast and met Love Quinn (Victoria Pedretti), a fresh object of his obsession. He also became friends with Ellie Alves, a new neighbour (Jenna Ortega). Things took a dramatic turn in the middle of Season 2, and the storyline surprise was so genuine and mind-boggling that it prompted fans to log a total of 457 million hours of TV time.

Even though Goldberg may be one of the most ambiguous TV characters we’ve ever seen, you still want him to succeed. Over the top, as it may be, the show’s tension, drama, and thrills are what keeps viewers coming back for more, making it one of Netflix’s most talked about and most watched Netflix tv shows ever.

You are the type of show that naturally sparks debate (and memes) online. After a lacklustre reception in its September 2018 premiere on Lifetime, the programme was able to find a permanent home, a large fan base, and international popularity on Netflix.

Penn Badgley’s portrayal of Joe Goldberg, who has become one of Netflix’s most famous TV characters, has catapulted him into the public eye.

Everyone in the You hive is 100% committed to you. Since the release of the third season of the Netflix psychological thriller in October, the streaming service has seen an increase of 468 million views. Fans were interested in seeing how Joe Goldberg, a serial murderer like themselves, would fare in his marriage to the equally psychotic Love.

The third season brought the anarchy that viewers have come to anticipate from the programme. Season 4 of the show, which is based on the novels by Caroline Kepnes, is on the horizon, and it will be fascinating to see how many viewers are willing to devote even more time to their televisions to find out what Goldberg does next.

Everyone in the You hive is 100% committed to you. Since the release of the third season of the Netflix psychological thriller in October, the streaming service has seen an increase of 468 million views. Fans were interested in seeing how Joe Goldberg, a serial murderer like themselves, would fare in his marriage to the equally psychotic Love.

The third season brought the anarchy that viewers have come to anticipate from the programme. Season 4 of the show, which is based on the novels by Caroline Kepnes, is on the horizon, and it will be fascinating to see how many viewers are willing to devote even more time to their televisions to find out what Goldberg does next.

The 2017 release of the Selena Gomez executive-produced series 13 Reasons Why adapted from a novel by Jay Asher, was a huge success. Hannah Baker, portrayed by series newcomer Katherine Langford, takes her own life as a result of being bullied and treated cruelly by her high school peers. A student named Clay Jensen (Dylan Minnette) discovers a package on his doorstep two weeks after Hannah’s sad death, and the contents of the box begin to shed light on the mystery.

Inside the box, Clay finds recordings Hannah made in which she explains the 13 reasons why she decided to take her own life. Teenagers and adults alike spent a combined 476 million hours captivated by the show’s complicated plot and surprising turns. Even though it was aimed at a youthful demographic, the adolescent drama was widely panned for its brutal scenes of suicide and sexual assault.

The considerable criticism the show’s first season garnered did not deter fans from turning in for Season 2. In fact, Season 2 was watched 20 million more hours than Season 1, bringing the figure up to 496 million. Netflix played its part in cautioning its viewers about the show’s brutal nature by putting a warning trailer about the problematic issues that they tackle before the first episode.

In the video, the program’s cast members caution viewers saying that the show “may not be right” for persons coping with issues such as sexual assault, suicide, or substance misuse, and to consider viewing with an adult or skipping entirely.

The second season of the successful programme continues to examine the aftermath of Hannah’s death, and the impact it had on her classmates as they all battle with their own difficulties and traumas. The show lasted for two more seasons after that.

There was a lot riding on this programme, as it was based on a novel series that had also generated a successful computer game series. In addition to attracting an already-existing fandom, the series also managed to kidnap Superman, with Henry Cavill playing the role of the “witcher” in the series.

The Witcher may have also ridden the wave of Game of Thrones regret by providing fans with an experience that was comparable enough to the popular HBO series to satisfy their want for more of the same. With the release of Season 2 of The Witcher on Netflix on December 17 and Season 3 in the works, the series might experience a resurgence in popularity.

If you want to attribute Stranger Things 3’s inclusion on this list to anything, it’s the real buzz surrounding the show. After a lengthy hiatus, Stranger Things returned to Netflix in October 2017 for its second season. As one of the network’s flagship programmes, expectations were high. As a season, it was successful, but who watched it? You can rest assured that they were diehard devotees of the show; in 2022, when the fourth season of Stranger Things premieres, we’ll find out just how prepared they were.

One such series is called Money Heist. Money Heist is one of the greatest instances of proper word of mouth because of the way in which it combines a complicated narrative with rich storytelling and peak dramatics. Many Americans will watch anything if enough people are talking about it, much like they will watch foreign programmes like Squid Game.

You may have missed the initial buzz surrounding Stranger Things, but over the course of a few days, you’ve heard from several sources about how great of a show it is. If you’re just joining us, you can be certain that there will always be plenty of Money Heist to go around.

While most people are still quarantined from COVID-19, Netflix decided to unleash this period drama on the world just before the holidays, when Hollywood often saves its most epic feature films for distribution. Regé-Jean Page and Phoebe Dynevor are two of Hollywood’s newest stars, but we doubt anyone saw their breakout series coming. Furthermore, period pieces seldom receive this much acclaim, demonstrating that taking risks may pay off so long as the plot is worthwhile.

As a result of the show’s declining quality, audience members were shocked to learn that Page would not be returning for Season Try telling the timeline when you’re stuck following a plot that’s already been established.

Squid Game is the sole surviving instalment in the series that revived this debate. While these figures typically only include the first four weeks of a show’s run, Squid Game has seen its popularity explode in that short amount of time. TikTok and the rest of the internet were flooded with viral challenges and memes after the app received widespread praise.

The series that caused a shortage of white slip-on Vans has become the first Korean show to top Netflix’s global most-viewed chart, with 111 million people tuning in within the first 17 days it was available (with that number jumping to 142 million 11 days later).

The Squid Game series could be difficult to top. This kind of chaos seldom occurs. You can never rule out the possibility that Squid Game is now reigning supreme.

Time2digital is a company that provides up-to-date news and information about the latest in technology and entertainment. The company has quickly gained a following for its engaging and informative content. time2digital is dedicated to bringing its readers the most accurate and timely information possible.

The All New Exclusive Vivo Y35 featuring a…